Right off the top, I will say it... Hamilton is an awesome city.  It is blossoming with potential, especially for artists.  Rent is cheap and the community is tight!

Upon finding a little niche just off James Street North, we found an abundance of inspiration in turning an old storefront into a vibrant and creative new art gallery on King William Street. 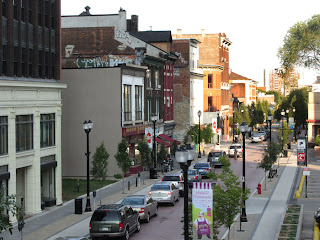 King William is the next street north of King and it branches off of James at the historic Lister Block.  It is steps away from anything and everything that is in downtown Hamilton and it is full of beautiful architecture with deep layers of history from the city's ups and downs. 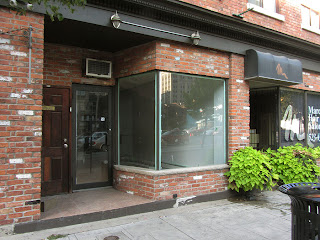 Only 5 doors east of Hughson Street is number 51.

The space was a narrow 13 feet at its widest and just a little under 50 feet deep broken into several small rooms.  It needed work and it would be a stretch to finish in time for the Hamilton Super Crawl, but nevertheless a challenge we were willing to accept. 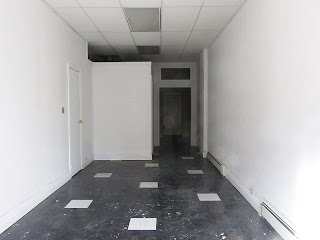 Shortly before September, we decided to take it upon ourselves to lease this sucker and give it life once again.

SEPTEMBER (crunch time)
Time to determine how and what we would need to do in the next week and a half before the doors can open to the 2012 Super Crawl. 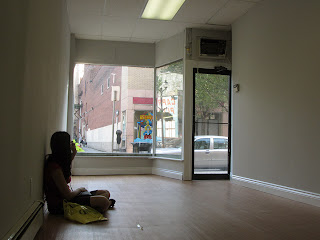 Melody contemplates plans for the space.

Posted by Manta Contemporary at 19:52 No comments:

MANTA Contemporary Art Gallery has a new home in the downtown core.  Just one street north of the busy Gore Park we have nestled away a snug storefront on King William Street.

Let me introduce myself a little better.

My name is Stephen, and I am one half of MANTA. The other half goes by the name of Melody.
You are bound to hear and see a lot more about us and the gallery on our blog.

We have been open for just a little over a month now so I will have to backtrack a ways to fill everyone in on what happened from the beginning.

In the meantime, come check us out in person at:
51 King William Street
Hamilton, ON
L8R 1A2

or online at:
mantacontemporary.com
Posted by Manta Contemporary at 23:15 No comments: