Almost two years ago I started working a really interesting position creating professional mascots for large sports teams and TV characters.  At first thought, the job was a far fetch from the regular due service in the food industry that many artists dread.  Located in the Lakeshore neighbourhood of Etobicoke between large empty rubble lots, social housing complexes and Ontario's newest super prison were five of us hired to construct a gnarly array of bizarre and ridiculous costumes.  If you can think of a mascot, there is a good chance one of us made it.

At first, the work was energizing and full of very informative and innovative construction techniques and materials.  However, as a result of the increasingly repetitive and monotonous work, it all began to take its toll on us.  The sweatshop feeling was becoming evermore present as we were pushed to work harder and harder.  We no longer found it amusing to wear the costumes for fittings and developed more intense exercises amongst ourselves to increase the level of excitement among us.  It is hard to explain the thrill you get watching your nodding coworker jump when you slap his desk as you walk by.  You know it is going to come back at you.  It really keeps you on your toes.  In an environment with high powered saws and precision blades, the old boss giving you the run down on your performance and justifying your financial shortcomings just wasn't quite lifting our spirits enough to keep us awake anymore.

A couple of slingshots and a crossbow.

That year, all of the mascot builders developed a close bond as a group, sticking together, yet withholding a subtle resentments cowardly expecting each other to stand up against the company.  Gradually, it wasn't that uncommon to have an 8 foot block of foam barricade you into the washroom, or returning to your desk to find everything you own glued in place.  As the bar rose and little antics escalated, it became a necessity to have a slingshot and a pocket full of chopped glue sticks at all times.  Slingshots turned into cannons, and eventually it just wasn't fun anymore unless you trapped your coworker in a giant box or something.

One day, I was at my desk assorting large bins of mascot parts when I was unexpectedly trapped in a cardboard box.  This day changed the prank game for good.  It was way more humiliating having a box hammered down on your head then collecting small welt wounds from glue bits being shot at you.  The key was to construct a box trap that would stay on someones head.   After a week or so the razor box head trap had evolved, equipped half inch thick rubber shoe treads cut in triangles facing upwards inside the box which would lock around a person's neck when pushed down far enough.  Same idea as the razor box from Saw II, but with rubber.  On the outside it was decorated with spare mascot eyes, a propeller hat and a couple of floppy arms that would flail about as one of us struggled for a good 10-15 minutes to get it off our head.  It was the utmost humiliating thing and it was worn with discontent at least twice a day.  You can imagine the paranoia of working in a sweatshop in constant fear of getting trapped, tied up and shot at with glue pellets. 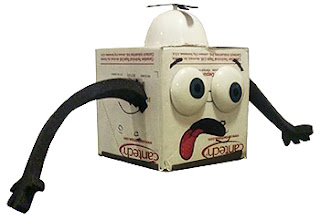 The real deal: don't get this guy stuck on your head! 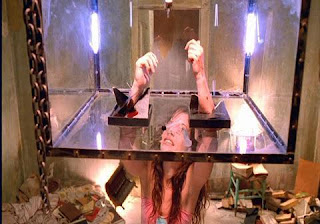 As our cabin fever-like state raged on, particular rivalries formed.  For proximity reasons, the target of my choice was the coworker that sat the furthest from me, Eugene.  Our relationship was both calm and tense at times.  Eugene was the oldest employee having worked there for 7 years and considerably more experienced.  He often touted about his time in the trade, but nevertheless he had the expertise to back it up. Despite our frequent assaults on one another, the space between us gave good grounds for cooling off when things went too far.  When it came down to business, we could always call a truce and brainstorm new ideas.  During downtime, we put our workplace differences aside and went out to one of the nearby derelict properties or to the lake where Eugene would often meditate.

If you are still reading by now, I will keep a long story short.  Later that year, the five of us all found our jobs to be a meager waste of time and quit one after another to go our own ways.

Eugene and I have kept in touch and occasionally share a laugh about the past, but for the most part, the boxhead days are over.  Eugene is still consistently creating costumes and masks of his own, inspired by easily accessible materials and with little bits and pieces from the mascot making world. 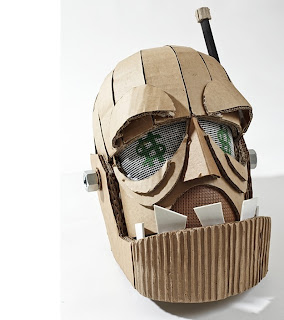 When I found out that Melody and I would be opening a gallery, Eugene's masks came to mind.  Recently, Eugene had contributed large cardboard creations to Manifesto shows at both the Art Gallery of Ontario and the Regent Park Arts and Culture Centre.

As part of plan to include various other ex-mascot creators we created our first annual mask and costume Halloween show at the gallery.  Experienced artists can showcase their talent by creating completely unique costumes never seen before, for sale too!  Just in time for Halloween.  Anyways, that's a whole other story, I will get into that later.  In the meantime, we needed a poster boy. 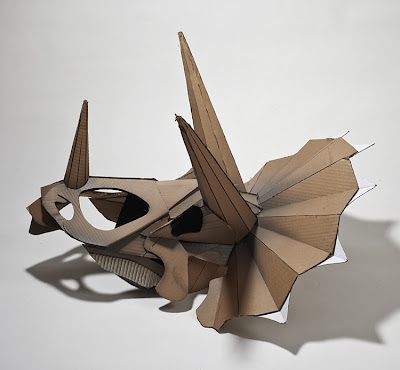 Eugene Paunil was raised in Markham and lives in Toronto.  He is currently working as a freelance mascot maker and artist.  Having studied industrial design at OCADU, Eugene has learned how to carefully render objects in 3D and has a strong passion for furniture design.  In recent years, Eugene has primarily been working with cardboard, creating full head masks reminiscent of various recognizable animals and other creatures.  The cardboard in each mask is left bare, creating a unique skeletal effect exposing the materials and process to the viewer. 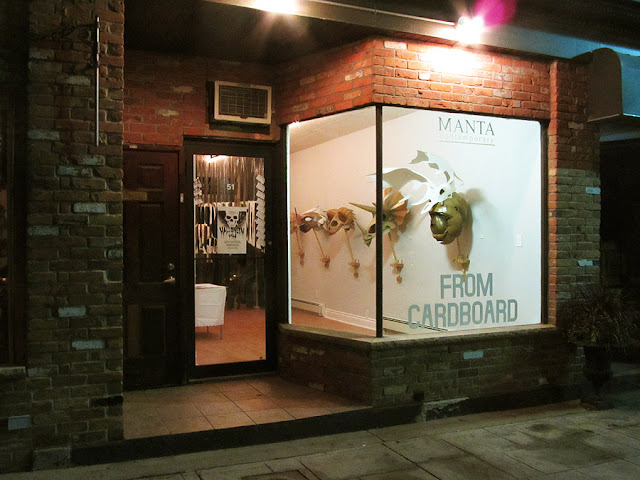 From Cardboard at MANTA Contemporary in October 2012.

Eugene included a collection of five large cardboard fabricated masks both wearable and decorative for our October exhibit titled, "From Cardboard" due to the lengthy history of the material in Eugene's trade and the importance it plays in his work today. 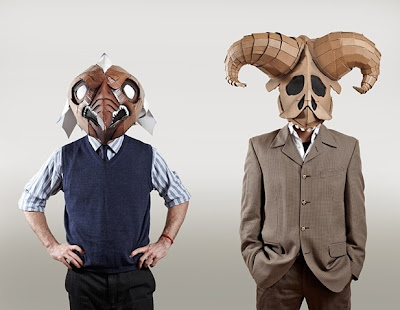 The Crazy Cockatoo and Ramasaurus Rex

For more of Eugene's work go to www.eugenepaunil.com.
Posted by Manta Contemporary at 17:36